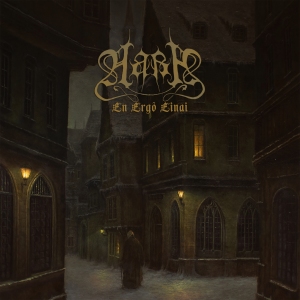 Switzerland’s black metal scene may be small but it has outgrown the spectres of its past to produce quality black metal that looks to the future. With AARA, the country has a project that takes the core elements of black metal and pushes the composition and emotional clarity to its peak. En Ergô Einai is a masterful display of musical knowledge – classical elements, ecclesiastical tones, synthesised projections, harsh shrieks – that all come together to create a work that belies the relative newness of the band. It speaks of a band who are completely in sync and after only two years as a project it is impressive that such fully realised works are already being made. Although, with just how small the local scene is, it wouldn’t be surprising if the people behind the band were already established in other known acts (those in the band prefer to use pseudonyms and cover their faces with extravagant, Venetian masks).

“Arkanum” is a deliciously rich opening with Vindsval of Blut Aus Nord contributing guitars in the initial moments and creating a base that feeds into the bands textures beautifully – these first steps are the calm before the storm and when “Arkanum” reveals its full self it is in a whirlwind of sound.  The melodic channels of the album are divine and each song is laden with clear harmonics that give the listener something tangible to hold onto, something to guide them on the pathway towards revelation.