Wow. It’s been some time, huh? There’s a myriad of reasons but none of them are very exciting and the problem of being in way too much pain to sit at the laptop and type for hours has been the biggest issue. But! There’s plans afoot and a procedure is booked for the end of April. Cool! I’d like to say that that will fix the issue of me just not being very productive…..but who knows? We’ll see.

Cobalt have had a much publicised, troubled history of late, with founding member Erik Wunder removing collaborator Phil McSorley from the line-up soon after discovering his heinous antics on the world wide web (it’s been documented countless times so far be it fro me to get back into such a shitty experience). After a lot of talk of new music, it was touch and go for the band and moving forward seemed a long way off. Yet, Wunder drafted in vocalist Charlie Fell (also going through a public break up with Lord Mantis) to add to his musical palette. Wunder is a delirious musician; he has crafted a stunning and epic double album and allowed Fell to explore his voice in much more scope than he has previously.

Cobalt tread a much different path than they have in the past, leaving many semblances of their black metal past firmly with 2009s Gin (the last time we heard anything from the band). Slow Forever instead incorporates other subtle influences – from the Americana style of the opening lines of “Hunt the Buffalo” to the bass driven punk of “Cold Breaker” to the sludgy howls of “Slow Forever” and the amped up dissonance of album closer “Siege.” It’s a varied and dynamic work that is filled with passion, despair, new-found drive and the occasional breath of beauty. The aforementioned track suddenly gives way to gorgeous, soaring guitars that move against the horror preceding it and allows a little spark of light to filter through. Of course, such serenity isn’t built to last and soon the song falls back into furious beats and pained screams. A devastating reminder that there is always a calm before a tumultuous storm.

Slow Forever can be streamed and purchased here.

Eve is the follow up to Sunwølf’s stunning Beholden To Nothing and No One and takes the duos sound one step further yet again. Eve is a slightly more stripped back record and instead of going all out with another two disc release, Sunwølf lay the foundations for the future in melancholy vibrations and mature progressions. “Gilded Heart” is the opening track and the dynamic flow that rests at its centre pushes out into the atmosphere surrounding the album as a whole. It’s an intensely personal journey, with the record being named post-recoding after Matt Carrington’s new daughter. That deeply personal nature is held in the introspection at work here and it allows sadness to feel its way towards the light. During the album’s play time, we hear Sunwølf grow and explore their fears and hopes for what may come to pass.

The harshness of “Haar” is counteracted in the steady rhythms of “Brother,” with echoing guitars spinning into the blackness while circling the main thrust of the song, a strong drum beat that carries the pace and pushes forward without overwhelming the melody.It’s a tactic that pays off, giving their music a sense of movement and escalating progression. Sound is used to create harmony, as well as subtle hints as to the subject matter of each track. And where words are’t included, it’s up to the instrumentation to paint a picture of Sunwølf’s inner minds. “Frontier” stealthily forges towards the desolate “Winterworn” and it’s simple structures of guitar build images of cold landscapes of unending despair and utter sadness.

Eve can be pre-ordered here. 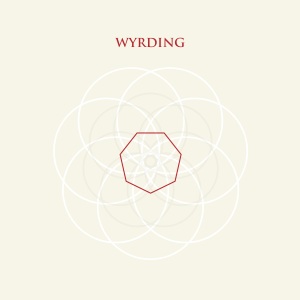 Listening to Wyrding will leave you feeling emotionally bereft and completely stripped bare. There’s no concrete way to describe their sound with aspects that are part funeral doom, part gothic opera and part ambient soundscape, but there’s a definite coherence found within its towering walls and climbing sorrow. There’s a gorgeous melancholy running throughout which harks back to founder and vocalist Troy Schafer’s neo-folk beginnings and the simplicity of that genre soaks in to the core of Wyrding and allows them to showcase beautiful compositions and stunning song writing.

“Steaming Blood Ascends Beyond The Moon” is one such track and the piano-led intro gives it a surreal lounge-act feel before breaking into echoing guitars that carry the weight of the world on their stunning progressions. Schafer’s voice is deep and passionate and here the band shine through the darkness with a song that moves in affecting waves. The lamentations found inside are deeply sorrowful and the band create an ethereal aura that transcends sadness and moves it on to another plane entirely. Wyrding is a unique record and one that may take some time to truly fall for, but once you’re there it will be difficult to forget the odes within.