Stygian is vast, bleak, draped in ice and layered with loneliness. Beautiful on its stark and cold voyage from dying embers of Autumn to the eroding ice of Winter. A novel in the guise of funeral doom and a story that brings with it a sense of hopeless dread; the sun has long since died and the world is covered with deep swathes of snow. Our protagonist must find their way through the curse of immortality and live with the knowledge that all they know is dead and buried and their own quest will never cease to end.

Atramentus formed in 2012 after Philippe Tougas (also of Chthe’ilist) walked for hours in sub-zero temperatures, giving birth to the final track on Stygian on his return home and creating the impetus to bring the band to life. However, this took some time and it wasn’t until 2018 that a line-up was secured and their debut could be recorded. For Atramentus this long process was necessary as their music is as deep and rich as it steeped in the echelons of winter; the two “main” songs are bridged with a sombre instrumental passage – “Stygian II: In Ageless Slumber (As I Dream in the Doleful Embrace of the Howling Black Winds)” that links the ebbing warmth of autumn to the overarching frost of winter.

Beginning on ominous sounds, “Stygian I: From Tumultuous Heavens… (Descended Forth The Ceaseless Darkness)” opens the album and sets forth the narrative. As described by the band, Stygian is a voyage undertaken by an immortal, nameless knight in a world beset by ice. It’s this journey that we are privy to and Atramentus use powerful vocals and differing sound structures to give each step a voice and include us on this harrowing trek into the vast world of ice that surrounds the nameless wanderer. Synthesised organ sounds underpin the first section of the song and create a rich environment where colour still exists, however, as the song progresses the final days of autumn implode and all colour is drained from the world leaving behind the harsh, violent winds of winter.

“Stygian III: Perennial Voyage (Across the Perpetual Planes of Crying Frost & Steel-Eroding Blizzards)” is a much more sorrowful piece that uses soaring guitars to convey the utter hopelessness that awaits the unnamed wanderer now, and forever. Tougas’s voice is a wonder as its moves from guttural and alien chants to sublime clean vocal lines (this is one of the best vocal performances of the year, no question) and truly gives rise to a plethora of emotions in its journey through defeat, vying for some kind of acceptance and falling short. To engage with eternal winter is to embrace death as the ultimate God and our traveller’s sadness at such a prospect echoes in Atramentus’s music, so much so that we hear the trudging of steps through the crunching snow at one point, bringing home the feelings of isolation tenfold.

Bittersweet pain radiates from the spoken word passage during the final five minutes before a glistening guitar solo pushes the pace forward and into rage-filled black metal territory, the song finally revealing the utter darkness that had so far been tightly controlled. The wanderer is angry beyond compare and their story has only just begun. How should one survive the perpetual, blinding white of winter, never seeing another living soul and never being given the gift of death? 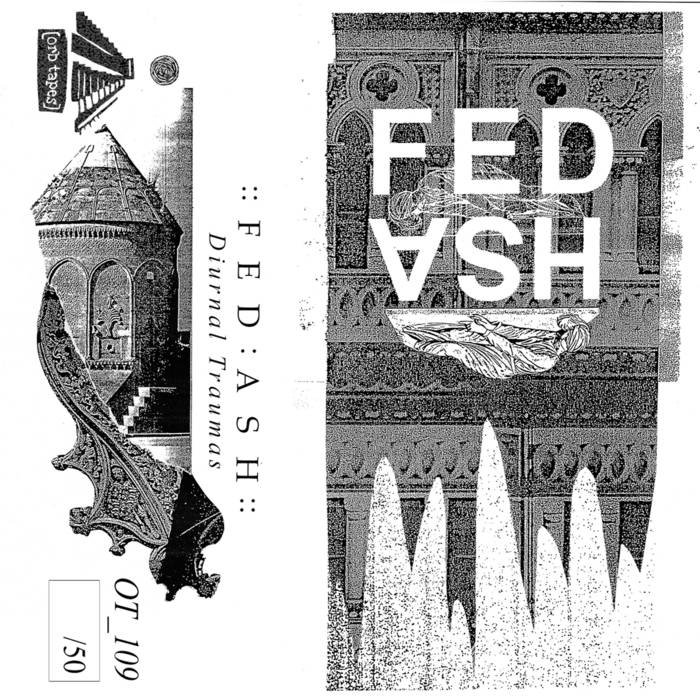 Fed Ash’s Diurnal Traumas is a deadly mix of grind, noise, electronic manipulation and more than a heady dose of rage. Released in June (this review is somewhat late), the New York quartet are blinding in their anger and Diurnal Traumas is a frenetic whirlwind of energy from beginning to end. “The Eternal Footman” opens the album on painful electronic manipulations, the sounds feeding into each other and creating a sense of disturbance before Allie French’s vocals cut through the mire, their voice a twisted narrator on this journey Fed Ash are about to take us on.

French’s vocals are stark against the dynamic rhythms beaten by the drums and the overdriven guitars which create walls of noise, threatening to drown out all but being kept from doing so by the powerful presence of Fed Ash’s vocalist. This is a voice of turbulence and destruction and one that houses bitterness in its snarls – “Suidae” is an inferno of drums of shouts and where the song finds its balance is in its ability to give contrast against the two competing elements, allowing each to light the darkness with their anger.

“Place” starts life on distorted electronics, again breathing chaos into the ether before the song moves into doomier territory; the slower pace is a welcome breather from the furious energy shown before yet the promise of safety is not given – the song teeters on the edge of the abyss and soon falls headlong into seething guitars and discordant atmospheres.

OK, first, let’s get that title out the way. It looks silly, it sounds silly and it is perfect. Old Nick are perfect. They’ve brought together the silliness of black metal and the seriousness of black metal. They’ve got incredibly catchy riffs (some which you might get stuck in your head when you wake up at 2am for no good reason – maybe Old Nick are the reason?), super lo-fi production as only the best raw black metal does and the kind of tongue-in-cheek humour that we so desperately need, in this year of chaos.

They appeared on fateful day in April, seemingly from nowhere, and each release since has only increased their recognition in the underground. From the extremely lo-fi beginning of Witch Lymph to the pretty damn good sounding – in comparison – The Night of the Ambush and the Pillage by the Queen Ann Styl’d Furniture, Animated by One of the Dozen or So Spells That Thee Eastern Vampyre Has Studied (T.N.O.T.A.A.T.P.B.T.Q.A.S.F.A.B.O.O.T.D.O.S.S.T.T.E.V.H.S), Old Nick are improving with great speed – this is their tenth release since April, which is wild. Obviously, such low-key recording doesn’t need a lot of time but the rate at which this trio are putting out music is incredible and to have it all be fun as heck and good? It must be magic.

The title track is a furious blend of spat out, high-pitched shouts courtesy of the fantastically named Abysmal Specter and drums that are sat so far forward in the mix that they cannot be ignored. Keyboards are a dominant energy that often house much of the melody of the song and guitars are beautifully fuzzy. It’s a tactic that Old Nick use plenty enough and one that seems to be working ever more in their favour – the album as a whole is deliciously catchy and if you’re not humming the synthy riffs of “The Abysmal Chess Masters Plate of Fruits, Figs, Cheese, & 3 Varieties of Apple” or thinking about the jagged guitars of “The Witch’s Terrible Library Book, Due on October 31st, 1756” then something has gone very wrong indeed.

Re-recorded from the Flying Ointment EP, “Vampyric Candle (Revisited)” is a great example of a band taking a good song and making it even better. The melody is sharper and therefore more enticing and the vocals, while still slightly set back in the mix, are pushed forward for a clearer listen and if this is the kind of progression that Old Nick can make in five (!) short months, then the future for them is extremely exciting. How can the album improve after this excellent moment? Well, with the super sorrowful progressions of “Smashing the Chandelier of the Meanest Ghost,” whose sadness is exacerbated by a minor key keyboard riff and a choral synth line that is melancholy incarnated, that’s how. And it’s not over yet; the final two tracks are Old Nick at the absolute finest – “The 12 Apostrophes of Elizabethan & and Victorian Lamentation’s” (not a typo) is a fuzzy homage to symphonic black metal while “Weeping Mystery Trench Coat” closes the record on bright keyboards and a euphoria that will carry you into hitting play on The Night of the Ambush and the Pillage by the Queen Ann Styl’d Furniture, Animated by One of the Dozen or So Spells That Thee Eastern Vampyre Has Studied (T.N.O.T.A.A.T.P.B.T.Q.A.S.F.A.B.O.O.T.D.O.S.S.T.T.E.V.H.S)  almost immediately after it ends.