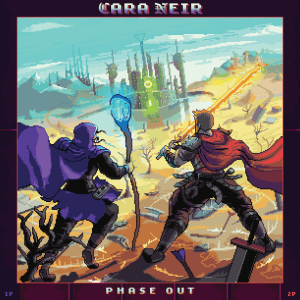 The evolution of Cara Neir has been a joy to watch unfold since they began over a decade ago in Texas. Their take on black metal has long been a singular one with differing elements taking their music on a fascinating journey from black metal to hardcore to experimental weirdness and back again but all with the incredible ability to make it make sense. Cara Neir’s trick is to take opposing forces and meld them in such a way as to make it beautiful and Phase Out fully realises that conceit during songs that are rooted in RPG lore and a love for gaming.

Phase Out is another step in the direction of the weird as the record takes on a distinctly video game tone; it opens on “The Triumjrtle Sanction” and a classic “Player One. Player Two. Begin.” sample and the song itself includes a lot of nods towards old school games with sound effects and a narrative that has come straight out of an RPG that you desperately want to be able to play. The album artwork is all pixel based and the band explore a world of the bizarre in the way that only video games can. The story is fantasical in nature and is something that the band (Chris Francis and Garry Brents) have clearly worked hard on creating and maintaining — a crowdfunder for a vinyl edition included a tier which gave buyers the opportunity to be a character in the follow-up.

The imagery is magical as “Damnation” screams its way through a moment that any player will recognise, the moment in which your faced with a challenge that you are not quite ready for but will take on as though you’ve got maximum HP and plenty of special tricks up your proverbial sleeve. Each song reads like a new level in this bizarre adventure and it’s subsequently a fun and joyful ride through the minds of the duo and it shows much more of them and their heart than perhaps their previous work has.

Phase Out explores the outer edges of what black metal can be classified as, and, in its twists and turns it expands the genre to include chiptune references, spooky electronic riffs, grindcore, the occasional homage to late 90s emo/screamo, most of which occur during the wonderful “Shady Blades,” alone. Here, Garry Brents takes on the vocal delivery and it allows for another voice to be heard in this story, fleshing out the characters and showing just what Cara Neir are capable of once they step completely outside of the boundaries of their base genre.

Aggression is also high on the scale of Cara Neir’s manifesto and the anger is fed through Chris Francis’ harsh vocal approach during “Valkyrie” or the violence of “Floodgates of Doom.” Both tracks have undercurrents of some of those aforementioned influences, yet the rage is extremely apparent in the lyrical content which is, essentially, a blow-by-blow account of two people making their way through a dungeon and the terrors and excitement that they find within.

Phase Out is the sound of a band fully embracing their quirks of personality and injecting it into a medium that they love just as much as the inspiration. Their huge catalogue is full of despair and bleak odes to death, yet Phase Out is the complete opposite — the trap beats of “Phasers Set to Relax” are a interesting addition and the furious 8-bit effects of “Hypogelum” swirl with blinding energy. While peril is close on many occasions, Cara Neir pull their avatars back from the brink until the final dramatic moment of “Legacy of Gnax” signals the end of the game….. or does it?

One thought on “Cara Neir – Phase Out”