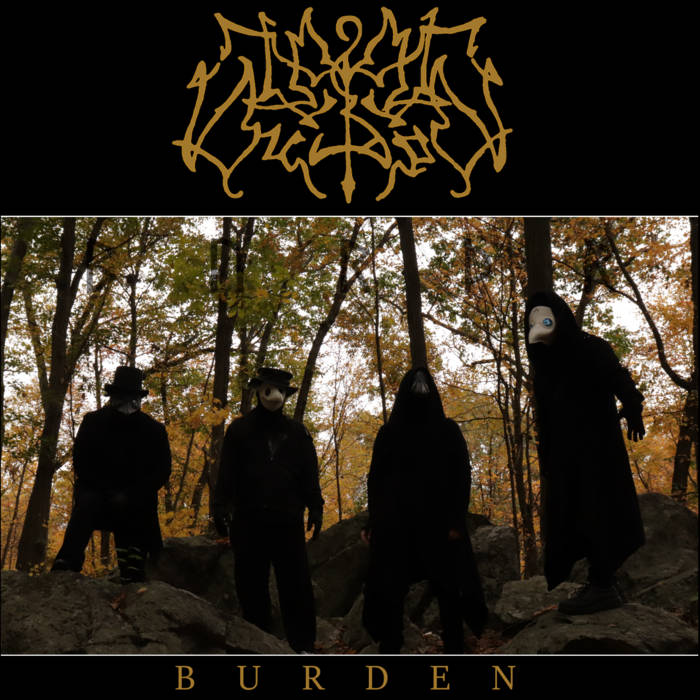 There is something quite charming about Burden and their atmospheric and doomed black metal. It could be the intriguing use of accordion which gives the music that rustic, old world aura that many medieval style bands lean towards. It could be the spooky synthesisers that add dimension and soaring notes to songs that are otherwise dark and doomy and it could also be the rough production that shows that this is a band still finding their way and trying to make their music heard is more important that it sounding shiny and clean. It all adds up to a record that is a captivating debut and one that shows enough promise to keep you engaged.

“November Sun” opens the album and the aforementioned accordion makes its presence known from the outset as it builds textures over a deep, gruff bellowed vocal and together the elements conjure images of cabins set far back in the forest, in a world that is steeped in history and doomed to stay there. The band do well to bring about a sense of folklore in their music as the songs incorporate traditional leaning keyboard sounds that feel as though they are dredged up from European villages in the 1400s. That link is threaded throughout Burden as the album progresses through the darker atmospheres of “Cold Farewell” and its dungeon synth qualities or the mandolin-led interlude of “The First Frost.”

Burden’s black metal is intertwined with a multitude of influences from doom to folk to symphonic metal and for them, it works nicely. There’s a sense of an affinity with the natural world which is felt during the spoken word passages of “Snow” and the radiant keys that spin out of the guitar leads and final track “Wolves” is an aggressive closing to the record. The accordion comes back to push the song into the folktale direction before the song segues into unusual, noise territory for a brief moment. Burden is far from perfect yet the band are showing a breadth of artistic ideas that with honing, could become something special. 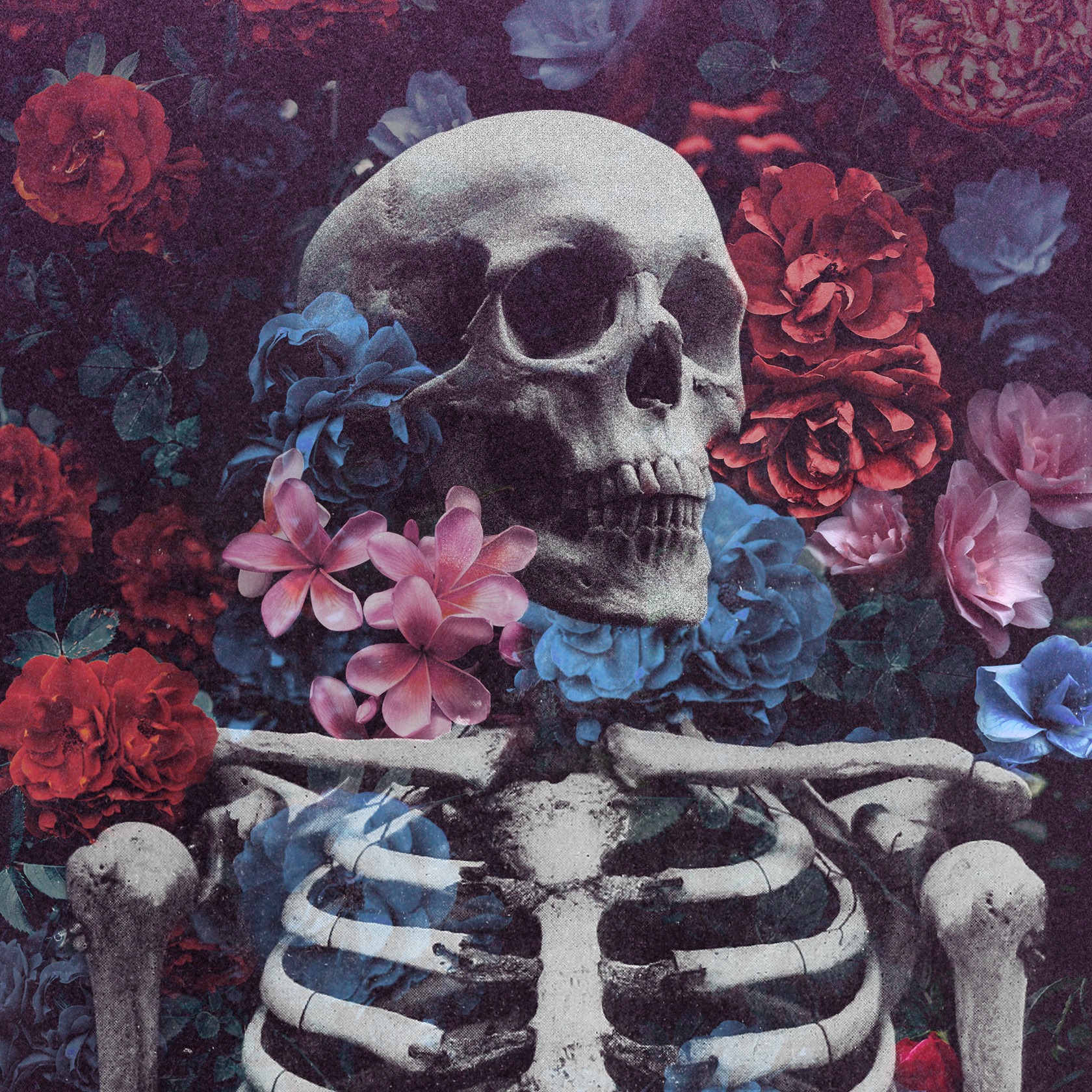 “The Fever Room” opens Corpseflower on curious drum patterns, echoing guitar lines and vocals that shift from hoarse shouts to spoken word to guttural chants all before the song hits the one minute mark. Cicada The Burrower is a band that explores all facets of its base genre of post-metal and infuses it with enough differences to make it a unique blend of sounds. As “The Fever Room” ends it blends seamlessly with the instrumental steps of “Glamour,” almost as though they are the same song. “Glamour” initially moves with matching guitars and drum rhythms albeit without the aggressive vocals that coloured the previous track before it slips into a new form in its closing minutes. Corpseflower blooms into shimmering structures as the song continues its journey forwards, keeping some of its former presence yet changing slightly on each hypnotic revolution through the sounds. It’s an interesting metaphor for the cycle of life as we continuously grow and develop on our way to the inevitable end, each year bringing about a difference that builds on the previous iteration and giving us hope that, eventually, we might achieve our truth.

For founder and sole-member Cameron Davis this might ring more true than for others as the artist has discovered more and more about her true self over the years as Cicada The Burrower has grown from its first breaths to what we now hear on Corpseflower. “Where Old Crystals Grow” continues that bizarre drum rhythm once again as the guitars begin to embrace a luminescent tone which brings some light into what has been, so far, a mesmerisingly uncomfortable trip into the psyche of Davis. “Psilocybin Death Spiral” brings about some clarity as to why Corpseflower has held onto those patterns and guitar lines as the song expresses a moment of personal dread and hatred that many of us have come to realise before. Cicada the Burrower is more than a musical project for Davis as it also serves to work through deep and painful memories in a way that is, hopefully, cathartic. 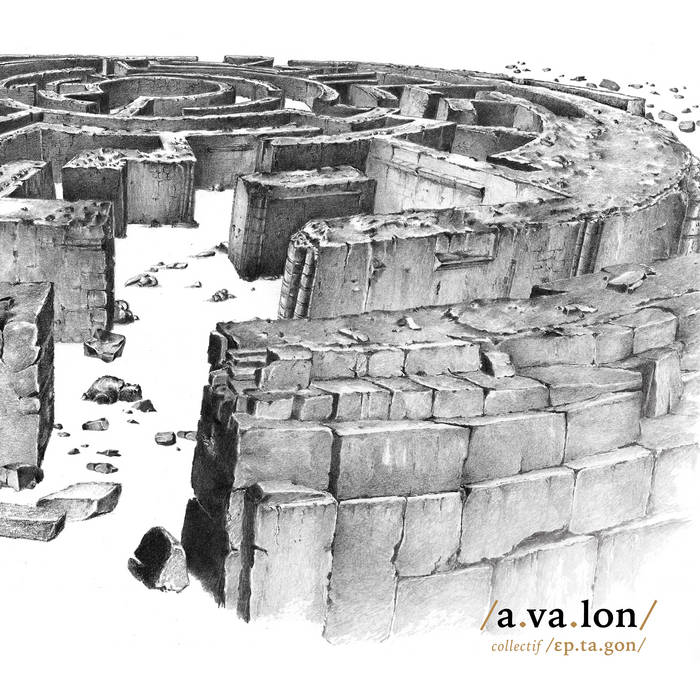 The idea of an artistic collective is one that has been around for as long as art has been present in our world and Eptagon, from the Grenoble region of France are one such entity. Eptagon is the home of a huge range of musical visions and a.va.lon is the result of a great many minds coming together to introduce their own sounds to the world. The compilation itself is well over two hours long and some tracks work better than others depending on your own individual taste and the genres range form ambient to death metal to thrash to grind. Some bands were already established while some are collaborations that came together during the lockdown period in 2020 and some songs are from solo artists which altogether gives an intriguing snapshot of a local underground scene.

Opening the compilation is the old school thrash-like tones of Kisin’s “Beyond Soul” which is an excellent way to start things off. Heavy and laden with groove, Kisin kick off a.va.lon with an impactful view of how some styles of music has stood the test of time. Epitaph’s contribution is the deep, rumbling death of “Morbid Evasion,” a track which was evidently never previously recorded by a band that has been active for over a decade as they moved on to discover new avenues in their musical paths. Thankfully, Epitaph did commit this monstrous track to tape as it is a monumental piece of old school death metal that needs to be heard. Fingers crossed that this band continues to record because if “Morbid Evasion” is anything to go by, they’ve got the formula locked in already.

Next up is the nine-minute behemoth of Demenseed’s “Mineral Wisdom” which traverses the gaps between progressive and death metal as the song moves from hateful vocal lines to crunching bass and curious melodic moments. Again, Demenseed are another project which has been active for ten years or more and as “Mineral Wisdom” demonstrates their ability to create devastating and thoughtful death metal, the hope is that Demenseed begin to push their way through the underground and closer to the forefront of the genre.

The quiet, lush soundscapes of Robusutā and their track “Arashi” allows for a pause of breath between heavier works, giving the compilation the room to expand the palette of sounds on offer and to also work natural peaks and valleys into the music that is heard here. Two hours of intensity is more than most people can handle and so this beautiful interlude is as much a welcomed rest as it is sublimely melancholic. Next is a track from Liquid Flesh (featuring members of Demenseed) who deal in a faster more chaotic version of death metal than the aforementioned band and in doing so create a texture of utter disgust in their music as it becomes difficult to follow melodies or find a natural flow to latch on to.

The bizarre free-jazz saxophone of “Beyrouth” by Anti​-​Douleur fits well into the running considering its off-kilter recipe and the constant feeling of teetering on the edge of madness while the alternative version of “Amass” by Barús allows for more expression in the darker tones and odd noise elements that stack on top of each other as the track spirals into the depths. Electronic music is served by Iranon which is led by Liquid Flesh and Demenseed’s Luc Messina and shows the other side of this mind is entranced by old school trip hop – it’s fascinating to hear projects that feature members of other groups on this compilation as you come to learn their personal influences are far beyond what was initially presented as their musical output – death metal and electronica don’t often share the same space but that is the magic of the artistic collective.

a.va.lon is an incredible collection of music and sounds and is a compilation aimed at discovery – of the past, the present and the future of the underground. It is really quite wonderful. 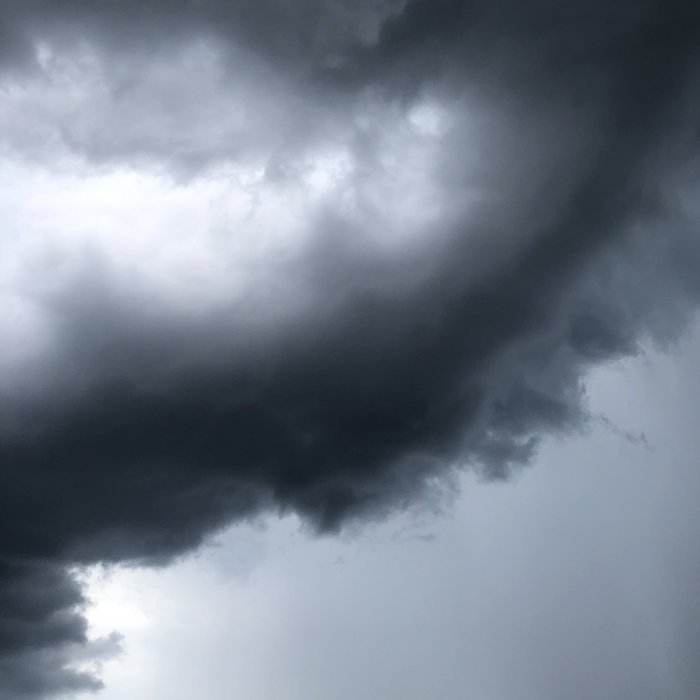 Nostalgique’s William Jarboe is more likely to be known as a member of Barbelith, a black metal band who are the polar opposite of this project in terms of style yet the heat and emotion that the aforementioned band has is certainly running through this instrumental take on atmospheric black metal. Jarboe’s solo endeavour is clouded with sadness;  the melancholy steps of opening track “Fallen From A Cloud Of Dreaming” are dusted with the kind of hope that you feel is just out of reach, as though the song is moving towards the light but is held back by the darkness that grows within. First Painful Steps… takes us on a journey — one that is blissful at times as the soft progressions of “The Shattered Inner Mirror” belie the depth the title implies before the song spins on its axis and introduces a harder edge.

First Painful Steps… was recorded several years ago, in the latter stages of 2013 and beginning of 2014 and feels as raw as it did on the day it was made. There is little to no post-production here (perhaps only the tracks have been layered and fit into the correct places rather than having a much in the way of mastering or fine-tuning) and the songs feel organic and natural in their flow because of that choice. “Light of Wisdom” is a gentle movement that carries you to a place of dappled sunshine, a clearing in the forest that embraces loneliness and introspection so that you may be alone with your thoughts for as long as you need. Nostalgique certainly evoke a moment in time that is often fleeting, that sudden sense of not belonging to this time or place and the need to wander new pathways in order to find your home. It’s similar in feeling to the way in which Alcest use their music to describe an otherworld that no-one else has experienced and Nostalgique have tapped into that vein of the supernatural, the magical transposing of music for emotion.

Night Shift.
I went to a real life musical event at the weekend and while I spent 90% of the time selling shirts or telling people I had no shirts left, I did go and watch @schammaschofficial and it was lovely. #schammasch #mehsuffmetalfestival
Silent Thunder (@lampofmurmuur ) tape arrived from @outofseasonlabel as well as a fun surprise. #lampofmurmuur #outofseasonlabel
I did not appreciate how wildly my hair would clash with this Old Nick shirt that @labyrinth_tower made. Sorry about that. #oldnick
Drift.
Can’t wait to not put this on my jacket. #lampofmurmuur