Thorns. You might have heard of this band. And if you haven’t, I can’t help but wonder what exactly you’ve been doing with your life.

I’ve done some very in depth research to prove to myself that this is not a band a lot of people know of and learnt that over the past week, the most played Thorns track scrobbled to last.fm had 63 plays. Whereas say, Emperor (check out the Emperor/Thorns split), has 645. Yet Thorns are a highly influential band, black metal through and through. So kvlt that they’ve only released one full length record in the twenty plus years since their inception. Probably because founder Blackthorn (Snorre) was imprisoned for eight years for his hand in the infamous murder of Mayhem guitarist Euronymous. If you can track down the early Thorns demos from a time when they were still called Stigma Diabolicum, then do. For no reason other than they’re excellent. Which is reason enough, right ? 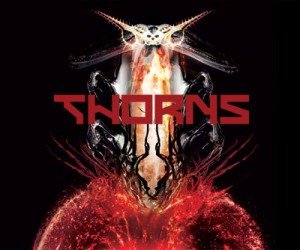 5. Underneath The Universe A

6. Underneath The Universe B

Snorre handles most of the instruments (guitar, bass, keys, programming) heard on this eponymous debut; drafting in Hellhammer (best known for Mayhem and Arcturus and also as a session drummer for an infinite number of bands) on drums, and two vocalists. Satyr (Satyricon – one of the most recognisable vocalists of our time – in my humble opinion) and Aldrahn (Dødheimsgard, Zyklon-B).

Thorns released this album in 2001, embodying the black metal aesthetic (lyrics based around humanity, the divine and a harsh sound to finish it off) found in second wave bands, yet also taking the genre into new realms by incorporating industrial elements. Keyboards play a large part in the music which often leaves Thorns being mentioned in the same breath as Emperor, masters of grandiose and sweeping synth led metal. Don’t make the mistake of thinking this band as a clone though. Oh no. That would be a grievous error. This is an altogether different beast.

Existence opens up the album with blastbeats galore, a neck-breakingly fast guitar line and Aldrahn’s deep roaring vocal complimenting the track perfectly. Aldrahn guests on three of the tracks, with Satyr on four. Snorre himself lends his larynx to the final song on the album, Vortex. I personally hope he does more vocals on the much rumoured release that should drop this year.

World Playground Deceit features Satyr on vocals, and the genuine catchiness of this song does bring to mind Satyricon. Which is by no means a bad thing. There’s a grinding riff, absolutely guaranteed* to get your head nodding in slow agreement. If you don’t want to shout “UGH” halfway through go back and listen again until you just plain can’t help yourself.

The beginning of Shifting Channels is pure industrial worship. The sound of clanging metal on metal and a slow beat hides the pneumatic robotic drills underneath. Heavy guitar and snarled vocal delivery round out this song. A love letter to bands such as Ministry and if The Terminator isn’t an influence here, I shall eat my hat (I love my hat, I do not want to ingest it). There’s a track on the newest Peste Noire album that really reminds me of this song. Something about the beat and downright dirtiness. Although Peste Noire’s offering features the cocking of a gun, it’s bonkers. But brilliant.

As mentioned previously, Snorre vocalises on Vortex. Another industrial beat led piece. Keys and samples being the order of the day here, conjuring up feelings of claustrophobia and the word Vortex seeming like it’s the most perfect song title for what you’re hearing. In places it’s somewhat minimal in comparison with other tracks heard on this record, until an overpowering riff kicks in and proceeds to demand the banging of ones head. A piano driven outro guides us towards the end of the song and closes the album on a deeply struck chord. Both literally, and metaphorically.

*Not a legally binding statement.